“Listen more, do more, and don’t try to be the spokesperson for Indigenous people. Don’t tell stories that aren’t yours to tell. Work with Indigenous people not on their behalf. Be grateful. Say thank you. Give back in whatever way you can.”

One evening, during a gathering with my poetry group, one of the group members brought a poem in which he attempted to articulate how affected he had been by the news of unmarked graves found on residential school grounds. A member of our group is of Indigenous heritage. He asked her, “As a white Settler, what can I do? How do I help?”

She nodded and thoughtfully answered. “You can listen,” she said.

In the spirit of listening, of truly listening, I revisited a book that has been one of my personal favourites since I first read it years ago, after that evening at poetry group, and found it as affecting and relevant today as when Athabasca University Press released it in 2012. My dear friend Naomi McIlwraith graciously agreed to answer a few questions about kiyâm, and talk with me about its relevance today.

Naomi McIlwraith: To be a fluent speaker, in my mind, is to have heard over and over and over and over again as many words as possible in your mother tongue or another tongue to which you’ve had the blessing to have been exposed. The lexicon of a language is as vast as the galaxy, so when I say “as many words as possible” I mean all the words your Mom and Dad and brothers and sisters and Aunties and Uncles and Grandmas and Grandpas have ever spoken to you, plus all the words that all your teachers and friends and everybody else has ever spoken to you. So, this is one part of being a fluent speaker. But to be a fluent speaker in every sense imaginable requires of us to be fluent listeners first. We were hearing and listening even before we let the river carry us from our Mom’s womb, and we’ve been hearing and listening ever since. It’s the only way we become fluent—and that is to listen far more than we speak. I really hesitate to compare one culture to another especially since I am of so many cultures—Cree, Ojibwe, English, Scottish, Norwegian, French—but I feel deep within me the need to be a better listener. Perhaps because I’ve been schooled in the industrial sense of schooling, I’m therefore very adept with the written word but must work much harder with the spoken word. I must work very hard at listening, but I’ve let the noise of the world drown out the beautiful sounds of nêhiyawêwin so that I’m not yet able to ride another river—fast fluent speech in nêhiyawêwin. I’m not yet a fluent listener of nêhiyawêwin, so I’m not yet a fluent speaker. I need to listen more before my canoe will navigate the rushing waters of fluent speech in Plains Cree.

EK: Something I hear a lot in the Settler community is, “How can I help?” “What can I do?” Can I ask you how you would answer that question?

NM: I’ve learned in my work with Indigenous peoples that Settlers will do well to let Indigenous people solve their own problems. This is not to say that Indigenous people don’t want the help of Settlers; rather, Indigenous peoples know much better what they need. We need strong and determined allies who will do the heavy lifting of addressing all the injustices that Indigenous and other people of colour have suffered because of white supremacy in human history. But we don’t need allies to save us. We need allies who see how strong we are but who also see the great harms that white supremacy, racism, and other injustices have inflicted on Indigenous, Black, and other peoples of colour. Listen more and speak less. Thicken up your thin white skin if your sincere attempts to help are rejected by Indigenous and other people of colour. Their rejections are nothing compared to the destruction of racism through the ages. Listen more, do more, and don’t try to be the spokesperson for Indigenous people. Don’t tell stories that aren’t yours to tell. Work with Indigenous people not on their behalf. Be grateful. Say thank you. Give back in whatever way you can. Personally, the way I’ve lived my life, I don’t have any land to give back; all I’ve got are a couple of bicycles, an old Ford Ranger, and a heap of books, so I need to give back in other ways. Learn an Indigenous language. Learn the history of Turtle Island. Learn the history of treaties, of scrip, of residential schools, of the devastation of fetal alcohol spectrum disorder. Get to know an Indigenous person, really know them. Give them reason to trust you. Be patient because with hundreds of years of broken promises and distrust, trust isn’t gonna come easy or fast. Love. Love yourself. Love all the good people in your life. Love an Indigenous person. Read a book written by an Indigenous author. Read the final report of the Truth and Reconciliation Commission. Listen to music by Indigenous songwriters and musicians. Be a good Ancestor.

EK: In “Take This Rope and This Poem (A Letter for Big Bear)” you wrote, “What does it mean that it took / me twenty years to reclaim / the word pîsâkanâpiy from / Shaganappi Trail?” If I may ask, what is your answer to that question?

NM: More than twenty years ago while driving along a busy freeway in Calgary, I noted the sign that read Shaganappi Trail and thought it must be a Blackfoot word because Calgary is in Blackfoot country. Since then, I’ve learned that Shaganappi is a bastardization of pîsâkanâpiy—Plains Cree for rawhide rope. I’ve also learned that even though the Blackfoot are now mostly relegated to Treaty 7 Territory in southern Alberta, they were up as far north as the North Saskatchewan River as it meanders through Edmonton. And I’ve since learned that though recent history would like us to think that the Cree and Blackfoot have been enemies forever, further back in time before famine arrived with the slaughter of paskwâwi-mostos (buffalo) and the rush of Settlers, the Blackfoot and the Cree were allies. I’m still learning this earlier more accurate history. This is what it means that it has taken me more than “twenty years to reclaim the word pîsâkanâpiy from Shaganappi Trail” —that in learning nêhiyawêwin I’m learning so much truth that has been omitted from our colonial narrative. It will take a long time to right the wrongs of a history so wrongly told.

EK: While revisiting kiyâm for this interview, I was struck by how relevant it still is today. What lessons or ideas do you hope a reader can take from kiyâm?

For the past seven years, Ellen Kartz has been the Communications and Partnerships Coordinator for the Writers’ Guild of Alberta. She holds an MFA in Creative Writing from the University of British Columbia, a BA in English from the U of C, and a professional writing certificate from Mount Royal University. In 2018, she self-produced a stage show and poetry chapbook, both titled The Tenderness of Stone about a trek she made through Nepal’s Khumbu Valley. In 2021, Ellen founded a small poetry chapbook press and launched a quartet of chapbooks by emerging queer Edmonton authors.

A peacemaker by nature, Naomi McIlwraith believes that in her next life she will be a tamarack tree or a small mountain lake. Naomi is a poet, an essayist, a teacher, a talker, a canoeist, a tree hugger, and a fire-lighter extraordinaire! In 1989, with five other intrepid adventurers, she canoed from Rocky Mountain House, Alberta to Thunder Bay, Ontario. Then in 1995, she cycled clear across the country by herself to raise money for the Friendship Fund at Camp Warwa. The author of kiyâm, a collection of poems in English and Cree, Naomi loves the fine art of conversation. Her favourite words are “imagine” and “tawâw.” Naomi also rides a bicycle and walks tenderly on this sacred earth. 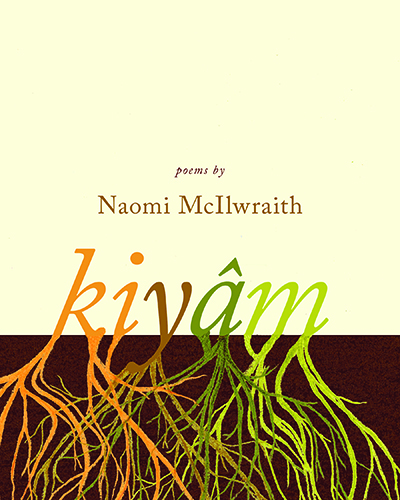