Home » The Writing of Stories of Métis Women

The Writing of Stories of Métis Women

Stories of Métis Women: Tales my Kookum Told Me is a book that was developed from a relatively simple concept: to tell the story of Métis women, in their own words. Of course, like most things this is much more complex in practice than theory. Marilyn Lizee (co-author and editor) and I had the idea for the book for a few years prior to putting pen to paper, however this book was truly a product of the COVID-19 pandemic. Our first meeting with our publisher, Dr. Lorene Shyba of Durvile & UpRoute Books, was in April of 2020. In that meeting we began mapping a blueprint for what we wanted the book to become. We knew we wanted to tell the stories of the women within our communities—the women who have raised us—the women who have shaped our Nation. However, this became more difficult as we realized that our traditional ways of gathering would not be safe as the pandemic continued on longer than any of us could have imagined. We knew we would not be able to go into communities to get these stories, so instead we connected through video chat and began to make a list of Métis women that we knew, whose life and experiences were emblematic of the Métis story.

We decided to divide the book into four main sections: Nation Building, Métis Culture and Identity, Dark Times, and Resiliency and Celebration. I wanted to start the book by introducing who the Métis are as a People and give a brief history of our Nation and the women’s role in building it. The Métis are often misunderstood; our ethnogenesis is complicated and often taught incorrectly, if at all. We are not simply a “mixed” People, rather a post-contact Indigenous Nation that arose from the marriage of European fur traders and First Nations women in the eighteenth century. The children of these relationships would go on to form a distinct culture, collective consciousness, and Nationhood in the Northwest. It was necessary to share this history, to contextualize the Métis story and the shared histories of every woman featured in the book. Throughout the text, the stories of the women are broken up thematically. Despite their unique upbringings and geographical distance, we are all inextricably connected as Métis people through our shared history, culture, and kinship ties.

Within the book, the unique and vibrant aspects of Métis culture are showcased—the Métis are and have always been a proud and resilient people. I wanted to highlight these aspects to give readers an in-depth understanding of the lives that our women have lived—of the joy and beauty, the strength and resiliency that encapsulates our story. However, we knew that we could not ignore the hardships, discrimination, and adversity that Métis women have been through. We are in an era of reconciliation, but you can not have reconciliation without truth. Many of the women within the pages of this book have experienced great hardships and the truth of these realities could not be ignored, nor should they be.

Ultimately, Stories of Métis Women: Tales My Kookum Told Me was a project with the sole intent to honour our Métis women. They are who we have always looked to for guidance, support, and love. They are, and always have been leaders within our families, our communities, and our Nation. However, for far too long their stories have not been told. They’ve been lost to time, and to a society that has not valued them. We want this book to be a small part in changing that narrative.

The book has also been translated into Michif by Mary SkyBlue Morin, and the cover art is a beautiful beadwork piece done by Krista Leddy, who is also featured within the book telling the story of her kookum, Delia Gray. Additionally, an accompanying documentary is available on Vimeo that was directed and edited by Matt LeMay.

Excerpts from Stories of Métis Women

Below are two short excerpts from the book that I have selected because I think they are a great representation of what it means to grow up Métis. Each excerpt first introduces the woman who is telling her story, and then gives a quote from her story as told in the book, giving a glimpse into the lived experiences of these women and the histories that have been collected in Stories of Métis Women: Tales My Kookum Told Me.

Delia Gray (as told by her granddaughter, Krista Leddy)

Delia Gray became the first Provincial Elder of the Métis Nation of Alberta in 1996 following the election of MNA President, Audrey Poitras. She was born at Wabasca Lake, AB in 1917 and devoted her life to preserving the language and culture of the Métis people. She cared deeply about her Métis community, and to honour her memory, the Métis Nation of Alberta named their then recently purchased head office building, The Delia Gray Building. Although Delia passed away in 1999 her story is remembered through the lives of her daughters, granddaughters and great-granddaughters who remember their Kookum through their stories of her life, and the time they got to spend with her.

This is one I tell when trying to describe my kookum. This was in the summer or early fall of 1997. Kookum lived downtown and would call me up to take her places for meetings (she called it “going to a do”) or go shopping. My first child was born earlier in the spring, and kookum would find some really good reasons that would have me bringing the baby over. On that particular day, it was a really nice day, so we ended up going shopping in the City Centre Mall, right in the heart of downtown Edmonton. I was pushing the stroller with the baby in it and kookum was fussing over the baby, very proud of being out and about with her great-granddaughter, speaking to the baby in Cree and giving me advice. Up ahead there was a man sitting on the sidewalk, leaning against a building, asking for change. He looked rough and most people were just walking by him. She elbowed me (she was quite a bit shorter than me, so it was a little jab to the hip) and told me to just keep walking. Don’t look at the man, don’t talk to him, just keep walking so that the baby wouldn’t be bothered, she said. I told her I would do as she said as we got closer. She moved so that she would be between the stroller and the man sitting on the sidewalk. As we were about to pass, he looked up at us and began to ask for some change. Kookum looked at him and suddenly stopped. I stopped, thinking something was wrong but realized she had stopped right in front of the man she told me to ignore. She took a step towards him and asked if a certain person was his auntie. He looked startled. His glazed over look suddenly became sharp, and said yes. She then asked if another woman was his mother. He said yes and stood up. She started to tell him a story about his mom, then a great story about his grandfather. This man was so happy to listen, and I remember his grin just lighting up his face. They chatted for a bit and then kookum took out her wallet and started to pull out a ten-dollar bill. If you knew her, this was a big deal as she was very frugal. He said he didn’t want to take her money and they talked back and forth for a bit. As the conversation began to become difficult for him, she made him promise to call his mother. He promised he would, and she introduced the baby as her great-granddaughter and I as her granddaughter. He was so kind, saying hello to the baby and then me. Kookum then urged me on, helping to push the stroller down the sidewalk. I tried asking her about this, but she just returned to fussing over the baby. This wasn’t the only time this sort of interaction would happen. She would see people and ask a few questions and then figure out who their relations are and tell them a great story, connecting them to a community and a place. She would give them pride in who they are and where they come from.

Doreen was born in Elk Point, Alberta in the early 1940s to Pierre Poitras and Margaret Garneau. She grew up on a farm by Elk Point with her parents and five brothers. Since retiring in 2000, Doreen has spent most of her time volunteering with the Edmonton Indigenous Seniors Center, painting, golfing, reading, and berry picking. However, her biggest joy comes from spending time visiting with her friends and family. Doreen is passionate about her Métis community and has been an active member of the Métis Nation of Alberta (MNA) for many years.

We were twelve miles from town so we did not go to the doctor. We used pioneer medicine. I remember our aunt showing us red willow bark and boiling it for breakouts on her face, then after use, pouring it back on a tree. I remember chewing a plant that we called Indian medicine, then applying it to cuts and abrasions. There were home cures for toothaches, for foot injuries. Seeing our dad roasting bark if he were out of tobacco, or roasting wheat to make coffee.

Our mother grew a big garden and we picked lots of berries and canned a lot and we stored vegetables in the cellar—enough to last till the following year. Our dad was a hunter and trapper, so we grew up on wild meat—deer meat in particular, along with partridge, prairie chicken and duck. I watched our parents making dry meat, and skin and stretch hides. I remember having the living room filled with stretchers of drying muskrat, lynx and beaver hides. Or seeing our dad come home from hunting with a deer thrown over the horse in front of him. He had a real good horse, as most won’t tolerate having a dead animal so near. I also remember watching them skin and butcher it on the kitchen floor.

All summer we were barefoot or in moccasins—they would outline our feet on the paper and someone—I don’t remember who—would make them for us. I also remember [my brother] Ernest and I picking chokecherries, then smashing them on a flat rock with a small rock and having them with cream, no sugar, and [it was] so good. Life back then was great. We worked at helping our folks. We picked rocks and roots using a stone boat pulled by a team of horses. We cut wood, carried water used for the washing and sterilizing the [cream] separator parts, weeding the garden, and all other chores without too many complaints.

About the Author and Editor

Bailey Oster is a Métis woman with roots in the Red River Settlement and St. Paul des Métis. Bailey received her Bachelor of Arts in Sociology with a research focus in restorative justice. She currently works as a manger within the Youth PRograms and Services Department at the Métis Nation of Alberta. She was elected as the youngest ever Vice President of New Dawn, the Métis Women’s Organization within Alberta at nineteen years old and still currently holds the position.

Stories of Métis Women is available wherever books are borrowed or sold: 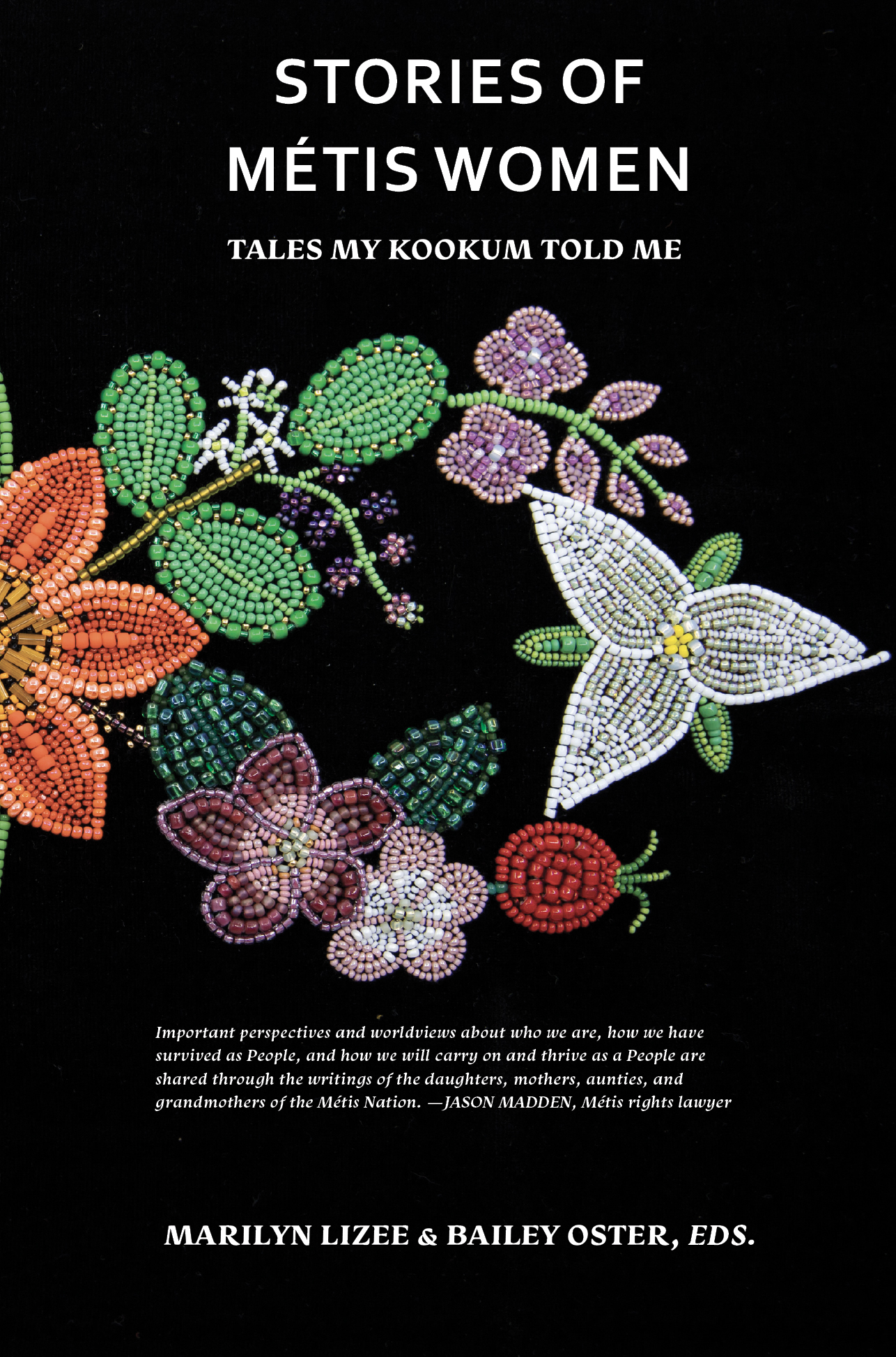 Stories of Métis Women: Tales My Kookum Told Me

Who Has Seen the Wind Comes Home to Alberta